Photography is truth. The cinema is truth twenty-four times per second. –Jean-Luc Godard

There’s gonna be a reason why I used that quote as a heading. Wait and see.

This film was first drawn to my attention as it stars Benedict Cumberbatch. I am following multiple Benedict Cumberbatch news accounts on Twitter and regarding to his casting announcement in the film, I became more and more intrigued with this film, and my curiosity came bigger as this film won numerous awards and also, being a considerable, potential winner to this year’s Best Picture Oscar.

And so, I watched it after months of waiting. Today, in a local theatre. I almost teared up.

This film tells us the true story about a free African-American in the American slavery era, Solomon Northup (Chiwetel Ejiofor). Through a series of events, he was abducted and sold into slavery to the South. He went through a series of slave owners; the kind Ford (Benedict Cumberbatch), the discriminative Tibeats (Paul Dano), and the maniacal Epps (Michael Fassbender).

The film features the emotions of Solomon Northup; how he refused to be a slave, and finally, had no other way than to accept it. As he worked in the perilous sunlight-laden cotton fields, or cutting wood for a new building, he faced the pain and the fear of doing something slightly wrong – and the fear of facing hundreds of lashes from his masters’ whips.

Slavery is cruel, yet most members of the public is only informed of the fact in a surface-level depth. When this film was first announced, people would compare it to a Tarantino work about slavery released last year – Django Unchained. The freed slave Django proceeds to rescue his wife and kill all the evil slave owners. Well, well, it doesn’t work that way; in real life, there was no badass slave that has the power to kill all the slave owners. 12 Years a Slave portrays the truth about slavery, even going through the grotesque methods the slave owners used to torture their slaves. Graphically. This movie is indeed not for everyone’s guts, because the truth about slavery is way scarier than it seems to be. Also, this movie might not fit the dramatic structure of a story, because it’s based from a book. Real, plain, truth, served the way it is. No dramatization, or anything. (Hence the quote above). Even, the white slave owners are all portrayed as cruel. Ford was a bit better than the others, but he’s also cruel. In the movie, there might be a “white slave owner saviour character”, but it is not exaggerated to the point other films do. It’s mostly Solomon Northup saving himself.

If you watch this movie, there might be something about this film’s looks that differentiates it from common Hollywood movies. Steve McQueen puts the artistic side forward in the movie. When Solomon Northup was first chained as a slave, the only thing we see is Solomon himself struggling for help inside a very, very dark room. The contrast is prominent, and it intensifies his feelings in the chamber. Also, there are several nature shots, and 30 second shots of Solomon, looking into the void, bottling up his emotions.

And, of course, there are some compelling performances by the actors and actresses. Chiwetel Ejiofor as Solomon Northup was indeed brilliant; he embodies his character really well, especially in the several 30 second shots. Michael Fassbender as a slave-obsessed “maniac” Epps was really believable and deep. And Lupita Nyong’o as Patsy, Epps’ “favorite” slave, did a really deep and sincere performance, really believable, and she made Patsy truly dig the sympathy of the audience.

Verdict? Perfect in every way – although, not for everyone.

I don’t want to survive, I want to live. — Solomon Northup, 12 Years a Slave 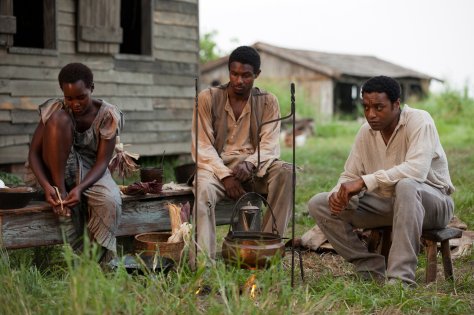