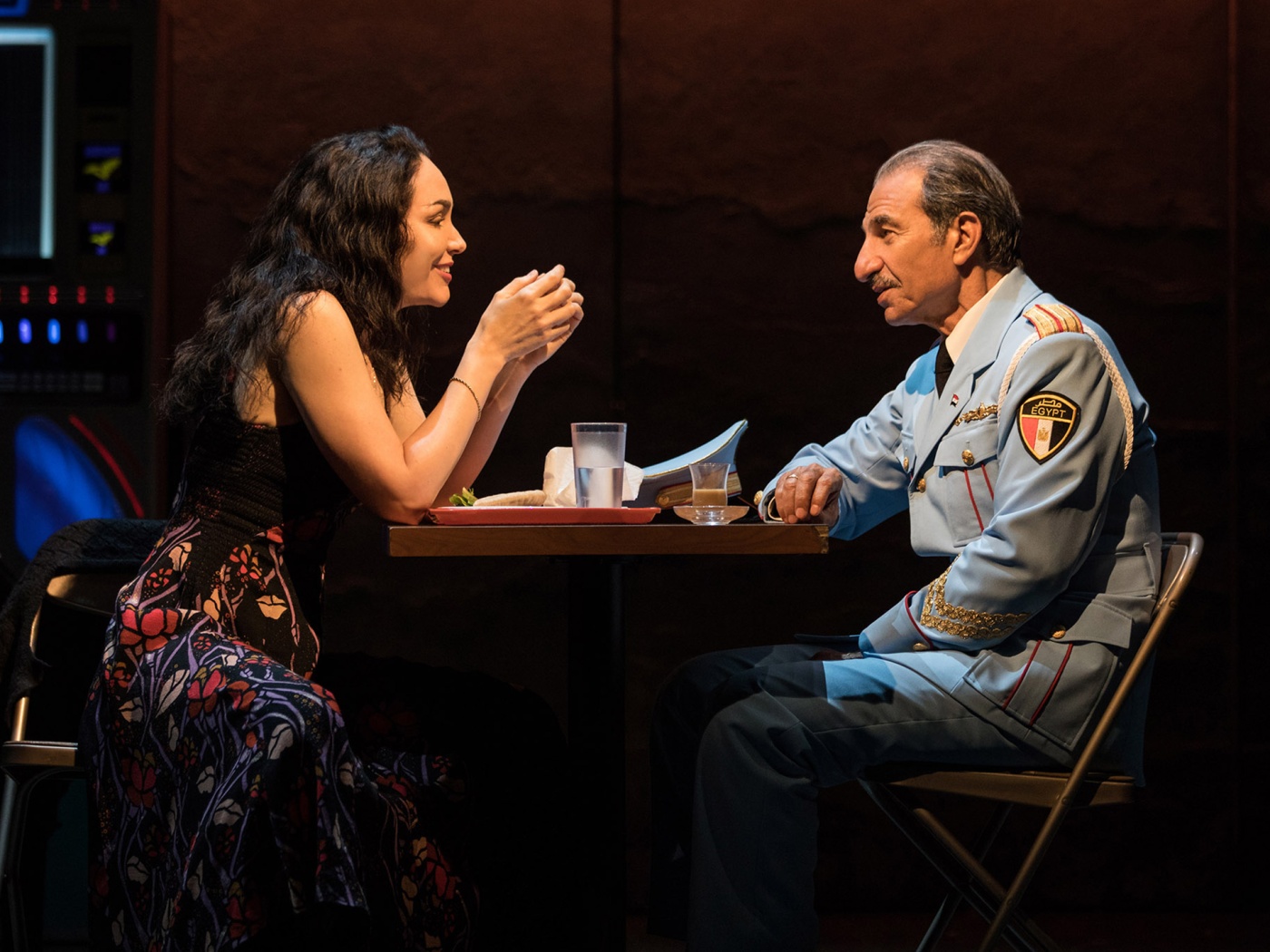 The 10 Tony Award-winning The Band’s Visit closes tomorrow. I’ve just got around to see it today—a day before it closes. It might seem futile to review a show that’s about to close, but after seeing it and wallowing to its soundtrack hours after the show, I am writing this because I want you to know how The Band’s Visit holds a special place in my heart.

In the heterogeneous small town of Bet Hatikvah, everyone is waiting for something big to happen. In the opening number, “Waiting,” the residents of Bet Hatikvah declares that they’re “experts at waiting,” exemplifying their boredom by saying that their type of waiting is not something interlaced with expectation, but instead with a knowledge that nothing is going to change.

In Beauty and the Beast, this change comes in the form of adventure. In West Side Story, it comes in romance. In The Band’s Visit, it comes in the form of a blue-uniformed Egyptian police band. They were supposed to perform in a cultural festival in the Israeli city of Petak Tikva, but due to a mix-up at Tel Aviv’s central bus station, they ended up in the desert town of Bet Hatikvah, where they are forced to stay overnight to wait for the earliest bus in the next morning. The Band’s Visit spans through that one night, highlighting the interactions between the Egyptian band members and the Israeli residents of Bet Hatikva. There is no definite plot, but there are a few subplots as the Egyptian band members observe and contribute to the daily lives of the Israeli residents. 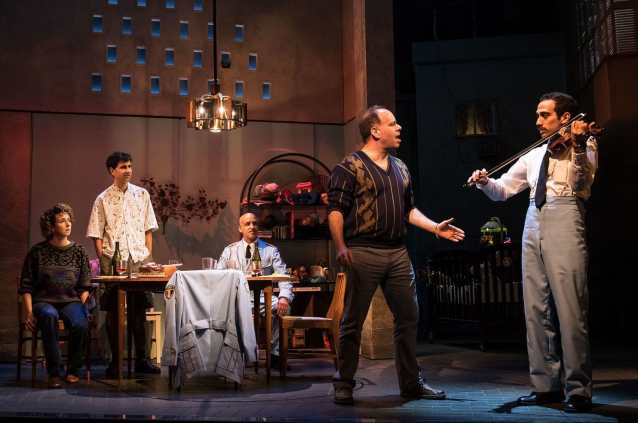 The power of The Band’s Visit lays both in its sound and in its silence. We become entrenched with the band’s music playing during times of the night, the residents of the small town being their audience. And then there’s the firm realization that it’s all live—the fiddling of the violin, the plucking of the cello, the banging of the drum. Their excitement is projected ever so resonantly to the audience, together with a feeling that we should step up and dance to the music. But, at the same time, the musical prides its moments of silence. The pauses and the sighs remind us that it is a small desert town; even in a scene where our characters go rollerskating in a disco-lighted rink, the music is kept muffled and the stage is kept barren. The lighting design and the cinematic transitions help control the pace of the play as well; the lights work extremely well in creating desert daybreaks and white sodium lights. The musical itself is very slow-paced; it lets its audience wallow in the boredom of being in a desert town while taking in the characters’ discovery of new horizons and cultures.

More often than not, the silences are felt when our characters are getting to know each other. The most obvious takeaway of The Band’s Visit is the power of intercultural communication—as shown in the show’s premise, about an isolated desert town accommodating people from across the border. These characters have many obvious differences, but The Band’s Visit chose to highlight linguistic differences. We see this for the first time as announcements to the audience made before the musical began being projected in English, Hebrew, and Arabic—three languages used throughout the show. The mix-up that landed the band in Bet Hatikvah rather than Petak Tikva is largely due to the lack of the /p/ sound in Arabic and a tendency to substitute it with the /b/ sound when speaking in other languages (for the phonology nerds, the voiceless bilabial stop /p/ becomes voiced into /b/). We also see some Hebrew and Arabic spoken onstage, most of the time with a character who does not understand the language watching the speakers, signifying some withheld information towards the character and the audience. Or is it just familiarity towards birds of a feather?

But there are instances where language becomes a unifying factor instead. There is a scene where one of the residents, Avrum, said goodbye for the night to one of the band members, Simon, where Avrum says “shalom aleichem” in Hebrew and Simon said back to him “walaikum salam” in Arabic. The common greeting is similar in Hebrew and Arabic, and the two characters understand them in opposite languages.

This is just one of many common grounds that the characters use to fill in the silence between their differences. It brings me back to Kenneth Burke’s rhetoric theory of identification I’ve been grappling on in one of my classes—that an effective argument comes out not just by being extremely persuasive, but by understanding your opponent’s argument and where they’re coming from, and then looking at your own argument and see where you’re coming from. By looking at this, you will then understand the common ground between where you’re coming from and where they’re coming from; see where your warrants are shared before you start on building rhetoric.

The Band’s Visit builds a lot of common grounding between our characters, and it is revealed little by little in magnitude. The most obvious comes in the characters’ mutual love for music and pop culture, since the Egyptian band members brought their craft with them to the small town. Haled, one of the band members, uses this common ground to pick up girls, starting his pickup lines with, “Do you like Chet Baker?” Some of these relations to music are more riotous than others; in “The Beat of your Heart,” Avrum tells the band about meeting his wife through a club and how their relationship is built on music. However, some are also more solipsistic: The showstopper “Omar Sharif” shows Israeli restaurant owner Dina telling band leader Tewfiq about her childhood watching Omar Sharif films and listening to Umm Khultum—two figures in Egyptian pop culture—singing about how her imagination flowed in her childhood days in hypnotizing lighting and choreography.

Other than music, love is also a uniting factor between the different backgrounds in The Band’s Visit. In the two-parter “Papi Hears the Ocean/Haled’s Song About Love,” restaurant worker Papi rollerskates with Haled and two local girls. Papi tells Haled about his fear of approaching women in a comic song with playful instrumentation, and the smooth-lover Haled teaches Papi how to approach women with his croon over smooth jazz instrumentation. Then, there’s the more domestic side of things—Simon becomes an observer towards restaurant worker Itzik’s strained relationship with his wife, while at the same time trying to take care of their baby in “Itzik’s Lullaby.” Simon consoles the crying baby by the sound of his clarinet.

On the other side of the same coin, loneliness and longing are the main uniting factor of the characters in the musical. All of our characters have experienced loss one way or another—for example, Dina with her missing husband and Tewfiq with the death of his only son—but only one of them chooses to put loss as the forefront of their identity: the unnamed Telephone Guy, who waits in front of a payphone during the entire musical, waiting for his girlfriend to call back. Near the end of the musical, the threads of the subplots are tied back together—Dina’s unrequited admiration towards Tewfiq, Itzik’s reconciliation with his wife, Papi’s newfound way of making connections—and Telephone Guy takes center stage. The penultimate song, “Answer Me” (my choice for the most beautiful song on Broadway this season, more than Hamilton’s “Who Lives, Who Dies, Who Tells Your Story” and Dear Evan Hansen’s “You Will Be Found”), outlines Telephone Guy’s longing, and he is then joined by all the characters in the play—who have all experienced loss—showing that loneliness is a shared currency, even though we may be led to believe otherwise. All cultures are bonded by music, all cultures are bonded by love, but most inescapably, everyone experiences loneliness.

As the sun rises and the band packs their suitcases, the residents of Bet Hatikvah continue their lives and the band proceeds to perform in Petak Tikva. Everything goes back to their status quo. But we know that something changed—in the hearts, minds, and understanding of both the Israeli residents and the Egyptian band members. These shared warrants in The Band’s Visit bring us hope in a seemingly lonely world.

Fun stuff: pics from my visit below!