Good news: Terry Gilliam can do no wrong.

Bad news: I’ve got chicken pox 😦 And I’m spending all the my bed rest time to watch some movies. Those films include The Big Chill (heartwarming and introspective), Fantastic Mr Fox (exciting and a work of art), Ex Machina (haunting and revolutionary), It Follows (chilling and creepy), Mortdecai (witty and quirky), Spy (entertaining and funny), Mulholland Dr (heartbreaking and bizarre), and finally Brazil. My decision to watch Brazil is started by my interest in the English comedy group Monty Python, and knowing that this film is the hailed by many as the best work of Terry Gilliam, one of Python’s members. Also because of my current affinity to weirdly enticing 70s-90s films, thank you, Jeff Goldblum. How amazing it is for me to find a film as good as this.

This film tells the story of Sam Lowry (Jonathan Pryce, you might recognize him as the High Sparrow from Game of Thrones S5), a civil servant who lives in a dystopian, 1984-ish world who has recurring dreams about him being an angel saving a damsel in distress. When he tries to take care of the government’s wrongful arrest due to a typo in the paperwork, he meets Jill (Kim Greist, also Molly Graham in Michael Mann’s Hannibal Lecter adap, Manhunter), a girl who looks like the girl from his dreams. Things go wrong and they’re declared as enemy of the state. This film also stars some faces you might know as that guy from that film: some of them are Robert De Niro, Ian Holm (Bilbo Baggins!), Michael Palin (one of the members of Monty Python), and Peter Vaughan (Maester Aemon in Game of Thrones).

I can’t really type down what I truly like about this film, because it’ll spoil the ending. Ehehehehe. Please, watch it for the ending.

Anyway, when we’re faced with the word “dystopia” now, we’ll be haunted by the images of babyfaced teenage heroes fighting for the oppressed, with tons of unnecessary romance and tearjerking scenes. I like those kinds of films as well, but, where has all the films like Brazil go? Charles McKeown, the writer of the film, stated that Brazil is “like lifting the top off Terry Gilliam’s skull… and glimpsing inside.” I would agree to that, yeap. Terry Gilliam has built his own dystopian world; a gritty cyberpunk world with hopes of restoration (and eventually failing) controlled by a government who kills and tortures inmates without a proper trial. The world he constructed is dark; even when it’s cheered with a suitable time setting (Christmas).

Humor is evident in this film, and it’s wide ranging. From jokes you might get from the first listen (jokes that make you say “heh heh Gilliam you sly rat”) until deep jokes that makes you think about the state of the world. But mostly, if you let it linger a little longer, the jokes here are dark and it bears a deeper meaning, and when you’re finished laughing you’ll probably wonder why the hell did you just laugh. The film is mostly categorized as a dark comedy flick. For example, see this wonder:

Wow, what a cool place with blue skies. Seems like the universe in Brazil isn’t that bad. 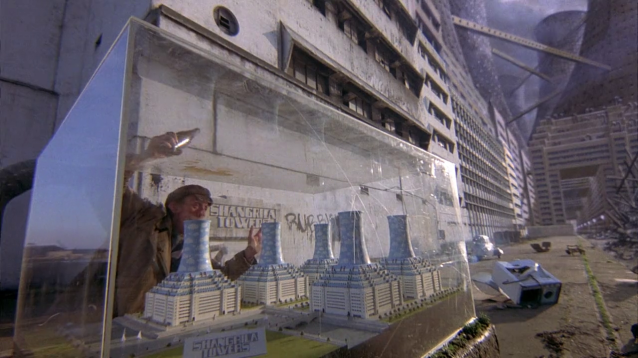 Joke’s on you. The blue-skied fantasy towers we see is actually a mere fantasy of a ruined totalitarian world. This also pokes fun about our own world, besides poking about the reality of unrealized human dreams, also about the unfair gap between the rich and the poor. Eugh.

Beside them, I like the characters in this film. You can easily sympathise towards Sam Lowry, our cloudcuckoolander of a protagonist. His escape towards the dreamworld is what’s good left of him in this sordid world.  Well, good for him. Jill is also our example of a satire – in Sam’s dreams, she is a beautiful, delicate damsel in distress, while in reality, she’s a truck-driving construction worker. Surprised? That’s probably how closed minded people feel when they encounter a strong female character. That’s why I like Jill so much. Jack Lint is Sam’s friend and a “tormentor” for the people arrested. We realize that he tortures people, some of them innocent, for a living. But then, he’s just doing his job. That makes me think; in a totalitarian government, ordinary people can do horrifying things and their answer is “just doing my job, man.” Will the greater power twist our morality? This film ties these characters into a remarkable script ending with a bang.

This film brings a surreal tone to the dystopia film, and also a few witty humor. This film leaves some great characters and a plotline that will enthusiast us. But most of all, this film leaves its audience walking out of the cinema haunted by the conclusion, the kind that seeps into your head and makes you think of the current world and what will the outcomes be if this thing goes downhill, and if we live in our own minds the whole time to escape from the harsh reality.